St.Wolfgang takes up a brilliant position in the cultural history of the state of upper austria. The community is situated at the foot of the famous mountain Schafberg (since 1893 train to the top of the 1783 meter high mountain) on the northern edge of the 13.5 square-kilometers large lake Aber- or Wolfgangsee. 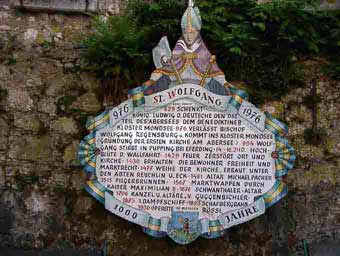 The Legend of Holy Wolfgang

The town owes it's name to holy Wolfgang who was looking for refuge in the area more than 1000 years ago. (Holy Wolfgang: bishop of Regensburg came to lake Wolfgangsee around 976  from his own monastery on lake Mondsee which was founded 748 by Odilo the duke of bavaria from the dynasty of Agilolfinger). Many legends ("Throwing Axe" und "Source Miracle" on hill Falkenstein) mention Wolfgang's construction of the first small church on lake Abersee by his own hands including the associated miracle healings. After Wolfgangs canonisation 1052, the numerous miracles and healings contributed drastically to the spreading of the peoples religionisation and the Wolfgang cult. 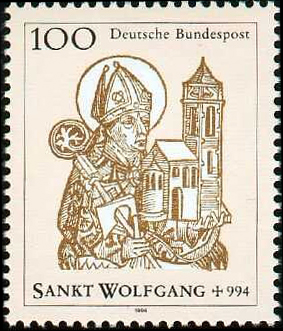 The monastery of Mondsee

... which was the owner of this area at that time, advertised and propagated the rite in and around St.Wolfgang. Construction of first romanic church was approved by Papst Lucius III 1183. 1291 documentary reports of pilgrimage to the small church of St.Wolfgang. 1314-1318, construction of first large pilgrim house. Since the countless pilgrims from different countries did not fit anymore, it was extended splendiferous in the 15th century.

Brisk construction efforts supervised by abbots Simon Reuchlin, Benedikt Eck and Wolfgang Haberls, who built the art history significant pilgrim fountain in front of the church in 1515. The church became famous over the centuries due to it's magnificent arrangements.

The impressive winged altar, finished by Michael Pacher in 1481, the gorgeous baroque altar by Thomas Schwanthaler (1676) including relics of holy Wolfgang as well as the three altars and the pulpit of the great baroque sculptor (1706) make the pilgrim church to an extraordinary art jewel.

The culmination of pilgrimage

was in the 15th and 16th century which influenced the creation of art dramatically. St.Wolfgang was besides Rome, Aachen and Einsiedeln one of the most outstanding pilgrimage towns. 1506, bought emperor Maximilian I the Mondsee area. 1567 bestowed emperor Maximilian II the market and township right including emblem to St.Wolfgang. In the course of the counter-reformation the pilgrimage was revitalized but the importance of St.Wolfgang was heavily restricted by emperor Josef II. 1791, the monastery Mondsee was terminated.

Another revival and an economic boom for St.Wolfgang was initiated by the near by summer residenz of the emperor in Bad Ischl (1829-1916). The lake, it's public shipping and mountain Schafberg attracted visitors from near by and far away. Famous painters from the 18th and 19th century carried the charm of St.Wolfgang out to the world and left their traces in town. On Nov. 8th 1930 the comedy play "Im weißen Rössl am Wolfgangsee" (In the white Horse Inn) celebrated it's premiere in Berlin. It lead to a world success and St.Wolfgang became world-famous and attracted film stars from all over the world. In 1930, this brought forth a regular flight service between St.Wolfgang and Berlin which was carried out with water planes that landed in front of the Grand Hotel in St.Wolfgang on lake Wolfgangsee.

The St.Wolfgang area had economically always been a farmer area with a craftsmanship oriented town center that was developed around the church due to the pilgimage. Later, the town experienced an economical boom through tourism as well as land and infrastructure development. St.Wolfgang including the towns and area around became an outstanding vacation destination and extended it's prominence in Austria by building generous hotels and resorts.

The, once art historical influental, pilgrim town situated at this outstanding and beautiful location surrounded from that amazing lake, forest and mountain sceneary, is, today, one of the most considerable tourism towns in Austria.
The great achievements over the last years, the traffic reduction in the center due to the tunnel and the construction of the parking facility next to the impressive and attractive Congress-Building "Michael Pacher Haus" contributed to the fact that the historic heritage of the past can still be experienced by all visitors that know that one should travel with heart and mind! 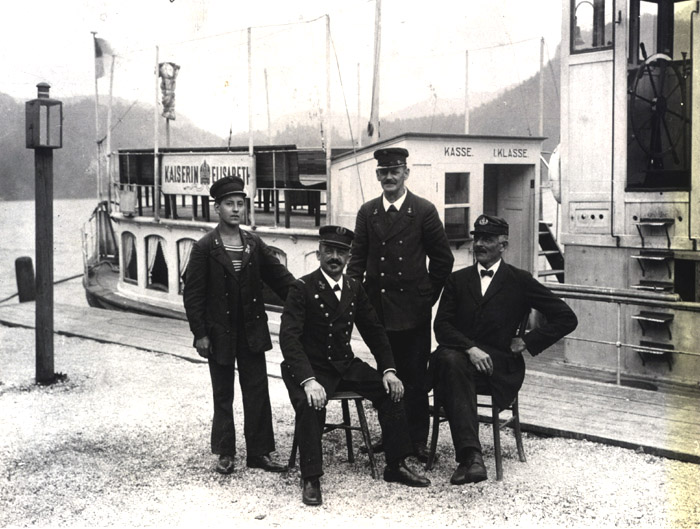